Karen inspires others through ‘Not the Parkrun’

The WELL Team were delighted to hear from an NICS colleague Karen Thompson (DfE, Netherleigh) who is inspiring others with her attitude to wellbeing.

Karen, who freely admits to not being an athlete, started Couch to 5K as a novice and now tries to inspire others to get exercising. As she says, “If I can do it, anyone can”

My name is Karen Thompson also known affectionately as Mrs T!  I started running as a dare 6 years ago when I took up the c25k.  Thanks to Laura May Wilson (DOJ) I no longer have my Saturday lie in! I became hooked when I did my first parkrun in Comber 6 years ago. Since then I have undertaken 152 parkruns. I joined Scrabo Striders in Newtownards and run on a regular basis. 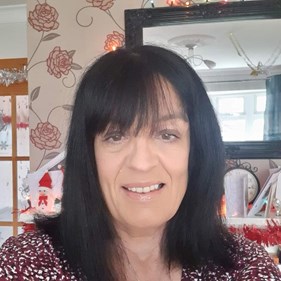 In August 2018 I set up a Facebook group called Parkrun Tourists NI. The concept was to travel once a fortnight to different parkruns round the country and have coffee and buns and a bit of craic afterwards. We had a great group of folk of all abilities joining in and the group was growing all the time. Last March we went together to Crawfordsburn Parkrun, but we were keenly aware that this was probably our last parkrun for some time as lockdown seemed imminent. We had no idea at that stage how long it would last for. 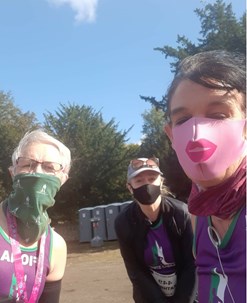 I know how much Parkrun means to people as there is such a community spirit and so much encouragement. So I knew that I would feel down and miss our parkrun outings, and I realised that I wasn’t the only one feeling like that. While thinking about what I could do to help others within the running community, I came up with the idea of “Not the Parkrun”.  It became clear from the start that the format of Not the Parkrun would have to be more flexible than actual Parkrun. So with this in mind I came up with the idea of a weekly 5k challenge to be undertaken at any point over the weekend with no fixed start time. The rules for Not the Parkrun were simple: walk, run or crawl 5km every week; alone or with someone in your family; from your own front door or somewhere permitted within the guidelines; and submit your time to me.

Each week I set about collating the results and publishing them on the Facebook page. It often took all weekend!

I carried on by myself for 20 weeks until August until one of my friends said, “Karen you can’t do this on your own, it’s too much.”

Thankfully I now have a team of volunteers who take it in turns to collate the results as there is a lot of work involved! Our volunteers are a mix of Scrabo Striders and Northern Ireland Civil Servants. A big thank you to John Callaghan, Stephen Lemon, Kelley McRory, Clare Walsh, who some of you will know who work in NICS. Our Scrabo Striders volunteers are Patricia Adams, Hannah Robinson, Gareth Robson and Lynsey Wightman. Without these volunteers I would have been unable to carry on alone with Not the Parkrun and see it achieve such success. 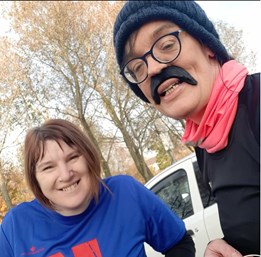 We feel it is important to celebrate our runners, so just like Parkrun we recognize when milestones have been reached. Stephen Lemon is in charge of monitoring the amount of NTPs folks have run, and we publish these as they are achieved. We acknowledge the first man/woman home every week, but as times aren’t our sole focus we also recognize a chosen participant to be runner/walker of the week too.

I wasn’t sure how this would take off. It began with a few friends and contacts. The first week we had 30 participants. However right from the start it has been seen as a positive group and it has gone from strength to strength building into to a strong community of participants, averaging about 100 walkers and runners every week. People have joined from all over NI, the rest of the UK, and Ireland. Friendships have formed, albeit virtually in some cases, and the group has developed into a strong support network.

Not the Parkrun has had several themed weeks with participants encouraged to dress up for special occasions like Halloween and Christmas, or to wear a certain colour for a charity. Runners are asked to send photos if they want to and we usually put together a little fun video of the shenanigans. Although we are primarily a fun run group some of the members felt that on occasions we could do some good in the community too and so to that purpose we have highlighted several issues such as mental health and raised some money for local charities. At Christmas we raised money for the TLC Food Bank and the People’s Kitchen, giving £170 to each.  Last week’s Not the Parkrun was all about our furbabies, as January is National Dog Walking Month and  lots of our members like to run/walk with their waggy friends (although we included all sorts of furry friends in our tribute!)

This week we are highlighting mental health again, with our theme being “It’s Ok not to be Okay”. Many of our members have been very open about their struggles with their own mental health and how running and exercise has helped.

Not the Parkrun is open to everyone. Pace isn’t important; our focus is finishing lines not finishing times. A mile is a mile no matter how fast or slow. We have participants from all walks of life, all ages and abilities, creeds and communities. We have our own Not the Parkrun T-shirts which have proven extremely popular. We have inspirational participants who despite having various ailments prove that nothing will stop them!   Come and join our Not the Parkrun, a weekly positive event. 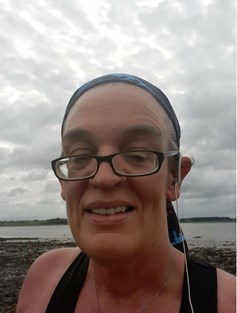 What have you got to lose? It is only you against the clock.  If you wish to find out more please contact Karen Suzanne Thompson – kabelfast@yahoo.co.uk

Facts about flu and the flu vaccine

Karen inspires others through ‘Not the Parkrun’